My parents met each other at different times. In fact, my mother met my father years before he met her.
Don’t worry, I’m not going to go off the recipe blogging track and begin writing a time-travel romance novel.
To hear mum tell it, she had a crush on papa since she was fourteen years old! They went to St Teresa’s Girls School and St Joseph’s Boys School respectively, and (from what people tell me) he fancied himself quite the Big Man on Campus; he played sports for the school, was listed as one of the top students of the state in his year, and well, there’s the whole mixed heritage thing he had going for him I suppose.
It has been thirty-six years since mum first fell into puppy love with papa, and as of this week, they have been married for twenty-nine years. Out of those twenty-nine years, they made and raised four wonderfully bright and attractive (lololol) children, even if the distribution of said intelligence and genetic blessing was imbalanced, as the first batch got far too much (oh, make it stop!) of the good stuff. They have bought, sold and lived in a total of fourteen houses (nomads, much?), crossed the seas countless times in pursuit one can only assume frequent flyer points, changed career paths seven times (shared number), shared at least 10 000 meals together (“A family that eats together, stays together” yes, Papa *salutes*) and only some crazy zany nerd would bother to count the rest.

My parents have always put the family first, and growing up with those values, I don’t think anybody can blame me for wanting the kind of love, stability, and intimacy that they have. They are each others’ best friend, and that is all I really want.
I took the day off work today to spend a day with the family; the kids are on holiday from school and it’s my parents’ anniversary! I couldn’t not bake them a cake! Plus I had quite a number of annual leave days I needed to clear by the end of the month.
So on this beautiful Friday, after a very lazy morning spent by the pool, I got started on this super special Chocolate Beetroot Cake with Beet Creamcheese Frosting. There was so much batter that I decided to bake smaller cakes instead, and ended up with two 8-inch cakes. One for my parents, and the other for my to bring to an outing with some of my close work friends tonight. 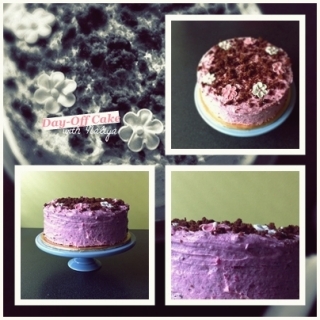 I would love to get into my parents’ whole love story, and soon I will get around to telling you about the time my father met my mother. Now that, folks, was quite cray.
But for now, let’s channel a bit of Bob Saget as he retells the incredibly unromantic tale of how Ted Mosby slept with the same 3 women over ten years and Uncle Barney shagged everything that moved… and bring you back to the current day. 8th of June 2012 to be exact.
In precisely two weeks time, my cousin, Lana, is going to marry one of the most stand-up men I have had the pleasure to meet since coming back to the country, Omar.
We’re rushing around with our last minute fittings, picking up items from various places, receiving frantic phone calls at the most inopportune times, and all the usual wedding-in-the-family activities. Just a few days before her wedding, our whole mildly insane troupe will be flying into Miri, Sarawak (top 5 happiest places in the world) where we will have a massive Sarawakian-style pre-wedding party!
Alright, alright, it’s really about the wedding, the marriage between these two people, and the life that they are about to embark on together.
But it’s also a little about the food and drinks and dressing up. For the rest of us that are not the bride and/or groom at the wedding that is.

Last weekend, we gathered the close cousins/friends for a tea-time bridal shower for Lana, organised by the newlywed Amy. She chose the place (love it!), theme (think I got it…), and most importantly: the games! We had so much fun over the space of a few hours, with Kaly and I up to our usual competitive tricks and winning all the games (are bridal showers like birthday parties, where the bride should win all the games?) and prizes, and being quite ungracious while doing so.

I wasn’t going to blog the cake recipe that I brought to the bridal shower, mostly as it’s so simple… but then again, I reckon that those are the best kind! My work-wife, Diyana, sent me the recipe for the Black Magic cake a few months ago and since then I’m sure I’ve used it at least four times. Forsooth, I stopped wondering why my waist is expanding.

Black Magic Chocolate Cake
Recipe from my baking addiction
So ridonkulously easy, I don’t even know what to do with myself. This recipe will yield one of the fluffiest, lightest and chocolatey cakes you will ever have in your life. Try layering it with unsweetened whipped cream! The balance of textures in that mixture creates a wonderful mouthfeel that you’ll find yourself craving weeks after.

Anyway, enough about the cake: To Lana & Omar, I can’t wait for the wedding, and I’m sure you two are going nuts at the moment with all the prep, so probably don’t have the time nor the inclination to read this blog, but if you do: I wish you both all the best that you can find in each other, that you will make happiness and laughter, and that you will have damn good-looking children! Love you both so much xx Nabs

Mother of two sweet baby boys, working a full time corporate job who dreams of writing a cookbook of favourite family recipes one day. View all posts by Nabiya Anthony